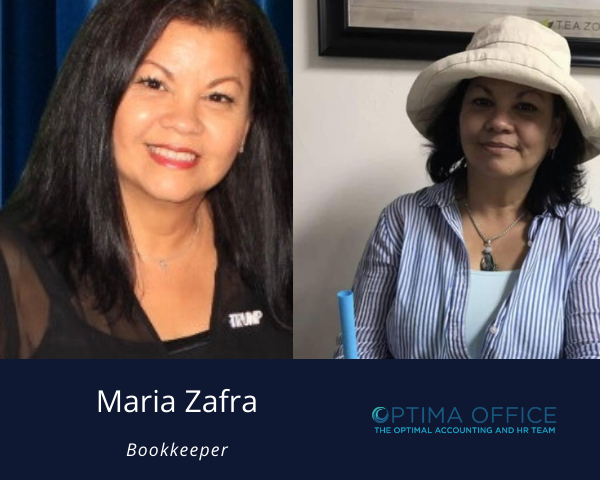 Maria Zafra is a bookkeeper at Optima Office. She grew up in Nicaragua before migrating to the U.S for political reasons. After her family was granted asylum, they eventually became U.S citizens, and Maria says they all “love this beautiful country.”

Maria’s goal after high school was to obtain a bachelor’s degree in Business Administration, but having a family became her priority instead. Twenty-four years later, Maria says she found herself single again and was eager to once again pursue her goal of obtaining a bachelor’s degree.. She enrolled at Palomar College and secured a job as a bookkeeper at a payroll outsourcing company and then at Proback Office, the first company that Optima’s CEO Jennifer Barnes started.

Outside the office, Maria’s hobbies include gardening, walking by the beach, and watching Disney Plus with her daughter. Her favorite movies are Moana and Brave, which she says she can watch over and over.

Maria believes that Optima is the best company to work for in the San Diego County area. Her goal is to become a Senior Accountant at Optima, and she tries to live and work by her favorite quote: “It’s not what I can get, but what I can give our clients to help them achieve their goals.”