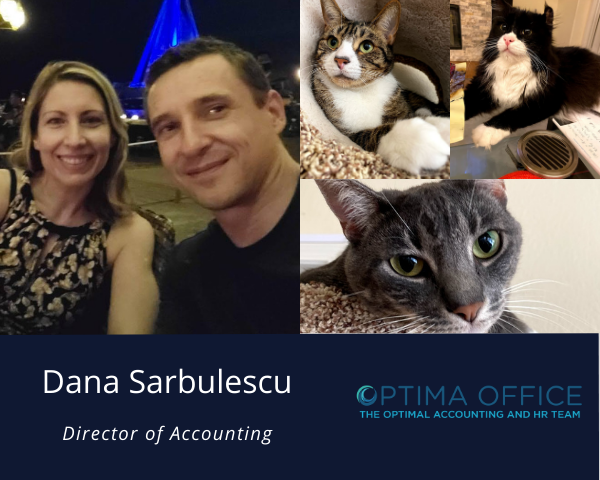 Dana was born in Romania, in the cute little town of Sibiu, where she attended a German school from elementary to high school. Sibiu had a sizable German immigrant population, so Dana benefited from exposure to the German language and culture.

Since 5th grade, it was her goal to make it to the U.S.A. She started developing her English vocabulary on her own and took the TOEFL and SAT tests in her senior year of college. She was admitted to several colleges on the East Coast on tuition, but unfortunately, her family could not afford the room & board costs associated with school. So instead, Dana attended college in Bucharest, the capital of Romania, where she graduated with a B.S. in Business Economics. Five years later, Dana’s husband was transferred with his job to beautiful sunny Carlsbad, where she joined him.

After Dana moved to the U.S. she joined an apparel manufacturer and e-commerce retailer. As the company was growing, she wore multiple hats and was involved in setting up processes in all departments of the company. Dana managed both Finance and Operations, and by the time she left it had grown to more than 30 employees and 2 business divisions.

That is when Dana realized that her passion was more on the Accounting side of the business, and she sought out opportunities that would leverage those skills.

Dana joined Optima in early January of 2020 as a Controller and was recently promoted to Director of Accounting. She is very excited to be part of such an awesome company that cares about its employees as much as it cares about its clients. Dana is eager to continue to learn and broaden her area of expertise while helping Optima’s clients with their accounting needs.

Dana and her husband enjoy outdoor sports, like snowboarding and bike riding. They have recently started hiking more and are exploring new trails and have also started growing their own garden.

Jennifer Barnes, CEO and Founder of Optima Office is one of the most successful and recognized...
Read more