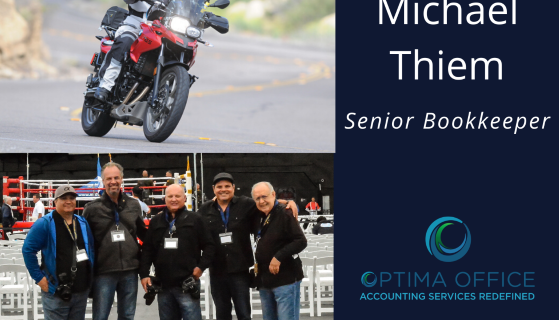 Michael Thiem is a is Senior Bookkeeper with Optima Office. He grew up in La Mesa, CA the middle child of three brothers. He graduated from Helix High school and attended the local community college as a Criminal Justice major and graduated from the Police academy. He has certificates in Computer Networking Administration, HVAC & Airflow distribution/Design, and Small Business Accounting & Bookkeeping.

He has enjoyed riding motorcycles for more than thirty years and enjoys touring and camping off-grid when time allows. Archery has been his Golf since 2005 (both target and 3D with compound bows). He also enjoys mountain biking, Kayaking and learning the guitar. My happy place is in my garage working on my motorcycle, bicycles, or fixing what needs fixing.

He started his career as a Manager in a drug store. After graduating from the Police Academy, he worked as an Investigator in New York City. When he returned to San Diego he worked in Implementing an Emergency & Disaster preparedness program for a university. From there, he worked on a Federal Contract (Security services during the 09/11/01 attack), and then went to work in the trades for a decade. After that, he returned to school and started working with Optima Office.

My favorite aspects of Optima are the incredibly talented people that I get to work with, and the time they have spent sharing their knowledge and expertise with me. I will always be grateful.

His favorite quote: “Our greatest glory is not in never failing, but in rising up every time we fail”
Ralph Waldo Emmerson 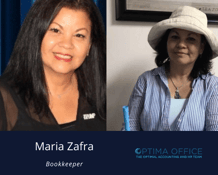 Ana is a Sr. Accounting Manager and has been with Optima for about 6 months.